Oakland is entering a critical moment in the efforts to resolve OUSD’s budget crisis, and we urge the Board and district leaders to exercise the leadership and discipline it will take to right the ship and truly address the roots of the current budget problems. The outcomes of the next couple weeks cannot be more instability and more mid-year cuts while tinkering around the edges of broken systems.

It goes without saying that cuts to schools sites should be avoided unless necessary to avoid state receivership. Already, school communities – particularly those serving working class neighborhoods with less access to private donations – are rationing copy paper, canceling field trips, and losing essential reading intervention specialists. Across Oakland, people are upset, and they have every right to be. Oakland’s students deserve a functional system that sends resources to school sites (which must be supported by an efficient, accountable central office) and invests in the best programs to serve them. Oakland’s educators deserve a system that provides the stability they need to do their critically important work.

We must hold board and district leaders accountable for decisive actions this month. If OUSD loses local control for a second time in 15 years, Oaklanders should expect the state to be very aggressive in cutting spending. For example, state receivership likely means school closiures, and soon, with little time for community discussion. OUSD has more schools per student than comparable districts and a recent analysis identified this as a major problem. To have the same ratio of students per school as San Francisco, Oakland would have to close 18 schools; to have the same ratio as comparable California school districts, Oakland would have to close 30 schools (Education Resource Strategies).

OUSD has no savings account.  OUSD began this 2017-18 year with no savings (unable to meet the state minimum) and a significantly depleted self-insurance fund.

State and county authorities are watching the board and OUSD staff’s leadership and decision-making right now. Any overspending could trigger authorities to call for state receivership.

State of California: On September 13, Chris Learned, the State Trustee, testified to the OUSD school board about the possibility of state receivership, stating that, “If you can’t pay your bills that would tell me that you need to borrow money, in this case, with Oakland, it would happen before that. [If your multi-year forecasts show negative balances] that might be a time that I suggest to the state . . .[that it’s] time to come back into Oakland.” If it appears that OUSD won’t be able to pay its bills this year, the State Trustee might recommend action by the state to take control of OUSD.

Alameda County: The County Department of Education, which oversees the OUSD budget, said in a November 8 letter, “As communicated in September, we also reiterate our serious concerns regarding the results of the recent fiscal health risk analysis as conducted by [FCMAT]. While the District has met the minimum conditions for approval for the 2017-18 Adopted Budget, we concur with FCMAT that “the District should take immediate action to avoid further erosions of the District’s reserve levels and possible fiscal emergency.”

Fiscal Compliance Management Assistance Team: FCMAT, a state agency brought in by the school board to analyze the district budget, said in their August 15 report, “The district should take immediate action to avoid further erosion of the district’s reserve levels and possible fiscal emergency.” and  “There are signs of fiscal distress for Oakland Unified School District. Of particular concern is deficit spending, substantial reductions in fund balance, inadequate reserve levels, approval of bargaining agreement beyond cost-of-living adjustments, large increases in contributions to restricted programs especially in special education, lack of oversight for position control that allows positions to be added before verification of funding and board approval, breakdown in leadership with excessive turnover, and the inability of the governing board to hold accountable administrators that have been allowed to overspend budgets and override board policy.”

And there’s more. For this year, OUSD under-budgeted for Special Education and Food Services by $4.7 million. This wasn’t known until mid-September of this year.

The direct problem is not a shrinking budget. Though OUSD is faced with rising retirement and health care costs, its enrollment has been relatively flat for the past five years (actually up by 55 students) and they have had increased funding from both the state’s LCFF formula and through new parcel taxes (Measures N and G1). 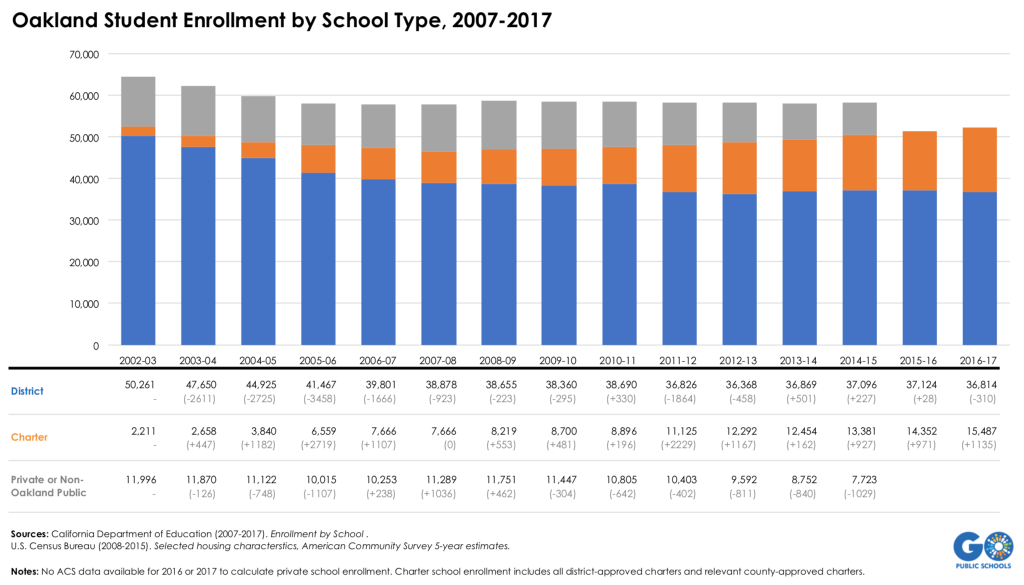 The problem is that without strong internal controls. OUSD has made decisions to spend without the corresponding cuts to keep its budget balanced. Additionally, OUSD will face flat state funding for the coming years and retirement costs will continue to rise.

The Board’s November 8th resolution directed the Superintendent to make $15.1 million in mid-year adjustments based on the best information available at the time. The board established the $15.1 million target by balancing the negative impact of cuts against the risk of OUSD going into state receivership.

As bad as the cuts feel right now, losing local control and being taken over by the state of California will be worse. And without significant mid-year adjustments, OUSD will likely go into state receivership. This means that we lose local control, our new Superintendent could get fired creating further instability, and the state will make decisions such as closing schools without engaging community.

This is an issue of risk. OUSD can cut less, but will have a higher risk of going into receivership. While there are no right answers, some answers are riskier than others. If the Board chooses to lower the $15.1 million, that decision should only be based on new information such as (1) current revenue or spending projections being better than anticipated, (2) the level of cuts being deemed illegal, (3) a determination that cuts would be so devastating in terms of function that they would actually increase the risk of receivership.

If OUSD leaders decide to make a smaller amount of cuts this year, they should also have a high level of confidence that the financial oversight changes they have put into place this year are effective. We have yet to see evidence that adequate capacity and controls are in place and remain concerned that OUSD will not be able to control its spending tightly enough for the following reasons:

What is GO’s Position on the mid-year 2017-18 budget adjustments?

Avoiding state-receivership, minimizing cuts to schools directly impacting students, overhauling financial management and controls, and putting OUSD back on a path to invest in the programs our children need should be OUSD board and staff’s top priorities right now.

We urge school board and district leaders to:

There are no easy answers to these problems. OUSD’s difficult decisions in the coming weeks need to happen to avoid worse outcomes, but this needs to be the last year of fiscal turmoil and mid-year cuts. We have a new, strong, local Superintendent in Dr. Kyla Johnson-Trammell and resolving this crisis is essential to supporting her tenure and leadership. OUSD leaders need to make the changes necessary to right the ship once and for all.

That will take time, investment, leadership, and discipline.

At GO, we will continue to gather, analyze, and share information and perspective to help all Oakland education stakeholders better understand where we are in this crisis, how we got here, our options for getting fiscally healthy again, and who is responsible.

We welcome feedback, suggestions, and partnership to strengthen our analysis and perspective on the path forward.